After last month’s report on the Queen Rearing course [see the June 2018 Newsletter, page 3], I seem to be at risk of becoming ADBKA’s special correspondent on queen rearing. Of course, like many journalists, I can write about a subject but am so far much less adept at actually doing it!

Well over 20 ADBKA members enjoyed glorious weather as we visited one of Murray McGregor’s queen rearing apiaries at his home near Coupar Angus. Murray owns and runs Scotland’s largest commercial beekeeping operation – Denrosa – and has an extensive queen rearing programme to support his 3,000 production hives.

After a picnic on the lawn surrounded by hundreds of colourful nucs, we split into groups to be shown round the operation by Murray and his staff, Jolanta and Sabine. Many of us commented on the exceptional docility of the bees, which Murray was handling without veil or gloves in most cases.  Murray pointed out that he is extremely selective from his many hives to choose only a handful of the very best queens from which to breed. Apart from the queen rearing site, with I would guess about 500 mating nucs, there are also two local apiaries, again with selected stock, in an attempt to control the local drone population too. Stock is sometimes brought in from further afield to add to the gene pool, and conversely, as Murray mentioned with evident satisfaction, some of his Scottish stock is being exported to Italy where they are doing well. 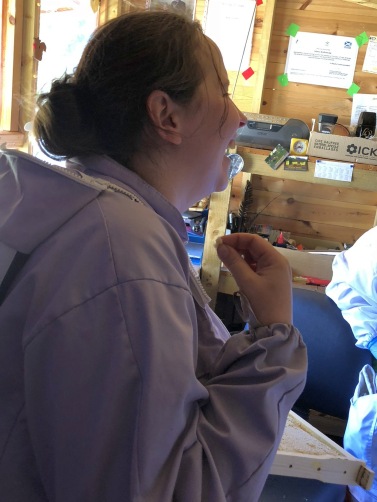 The process is not dissimilar to that taught on the queen rearing course, but the scale is impressive. Eggs are grafted from the selected breeder lines, which live in nucs in order to restrict the queen’s laying and thus promote longevity. Queen cells are developed in a couple of starter and finisher colonies. Cells once sealed are transferred to an incubator, where the queens emerge. The use of an incubator was explained as an efficiency measure, saving the need to enter colonies to retrieve virgin queens. The virgin queens, or sometimes queen cells, are put into polystyrene mating-nucs from where they eventually make their mating flights.

One device used which caught the eye of a few members was a ‘queen introduction frame cage.’ Rather than the common Butler-style introduction cage, the frame cage is placed over sealed brood and the queen placed inside. The queen is less stressed as she has much more space to move, whilst being both in contact with, but protected from, the workers, and emerging brood accepts her as the only queen they have known. (Having whetted your appetite – Paynes sell them, and Thornes do a metal, and more expensive, version).

The visit was a rare opportunity to see something unique in Scottish beekeeping (and uncommon in general). Whilst we hobbyists love to debate and try different things, and buy different kit for the same purposes, it was clear that commercial beekeeping can only succeed with simple, reliable and cost/time-effective methods and equipment, as well as highly skilled staff.  I am sure I express the feelings of all the visitors in thanking Murray, Jolanta, Sabina and Kasia for taking the time to give us a very enjoyable and educational visit.